Swiss Real Estate market in Q2 2022: how is the market doing?

In a context marked by uncertainty, how is the market doing? 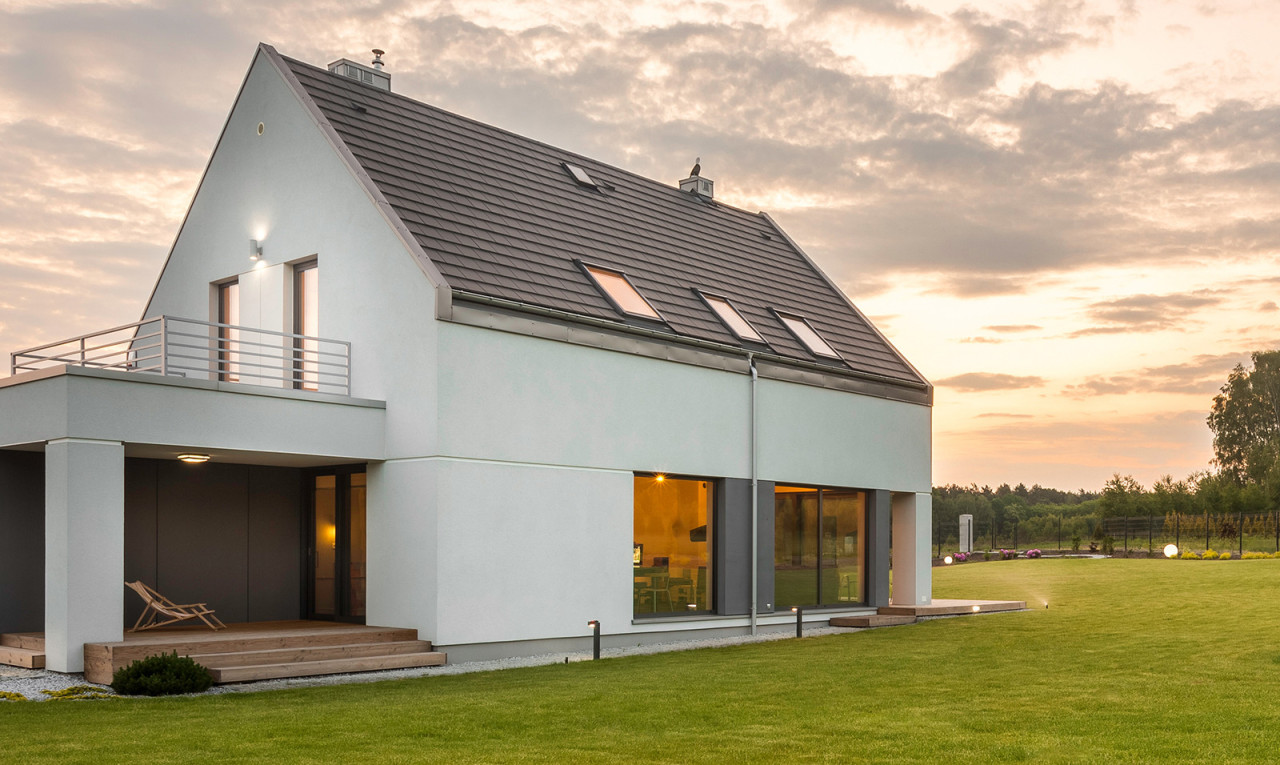 The last few months have been punctuated by numerous events such as the Russian-Ukrainian conflict and rising inflation.

These incidents have impacted the international economy and, not surprisingly, the Swiss real estate market. While it is always difficult to predict future repercussions, we can easily take stock of the current situation. In such a climate of uncertainty, is it always favourable to sell your property?

For several years now, the real estate market has been hit by a phenomenon of a decrease in the number of properties for sale, so the supply has never been as poor as it is today.

According to Wüest Partner, supply has fallen by almost 15% over the past twelve months, with a significant impact on single-family homes, where only 2.3% of properties are available for sale, compared to around 4% ten years ago. Condominiums have been spared a little more, but are still rare with 4% of properties offered for sale, the lowest rate in 17 years. This trend, which is spreading throughout Switzerland, also seems to be present in other countries, particularly among our French-speaking neighbours. SeLoger group, a specialist in real estate portals in France, has noted a 22% drop in the number of homes offered for sale in France in just two years.

This is due in part to the slowdown in construction activity. Initiated since the start of the Covid-19 pandemic, this decline has led to a temporary decrease in the number of construction projects and has thus impacted the sales market as a whole. In addition, more rental units have been built than ownership units, reducing the available supply in the sales market. And this trend is likely to continue for some time since despite a slow recovery in 2020, the number of building permit applications and approvals seems to be at a low. Additionally, we observe growing supply difficulties for raw materials linked to the Russian-Ukrainian conflict and China’s zero Covid strategy.

All these events are leading to an increase in the cost of construction on the one hand, and a lengthening of the construction period on the other, which is having a considerable impact on the supply of available new housing.

Since 2021, the 10-year interbank interest rate has been rising steadily and has recently been very volatile. It reached new heights last June, particularly with the announcement by the Swiss National Bank of an increase in its policy rate.

For the consumer, and more precisely for new buyers, these changes have a direct impact on the mortgage interest rate, which has increased significantly compared to last year.

That increase could also impact current homeowners during renegotiations, especially if their current mortgage is about to expire or if a new acquisition project is underway. They could see their monthly payments increase if the rate of their current mortgage is lower than the rates charged by their financial institution during this renegotiation.

Even if the monthly payments for homeowners have increased somewhat, ownership is still beneficial since it offers many tax advantages that should be discussed with a financial advisor. We also note that non-financial factors also enter into the equation regarding future buyers’ decisions to become homeowners.

A declining, but still high, number of buyers

At Neho, we are seeing a clear decrease in demand during the second quarter of 2022. Indeed, between April and June, the average number of interested buyers per property dropped by almost 45% to only 39, instead of 64 on average in the first quarter of 2022. 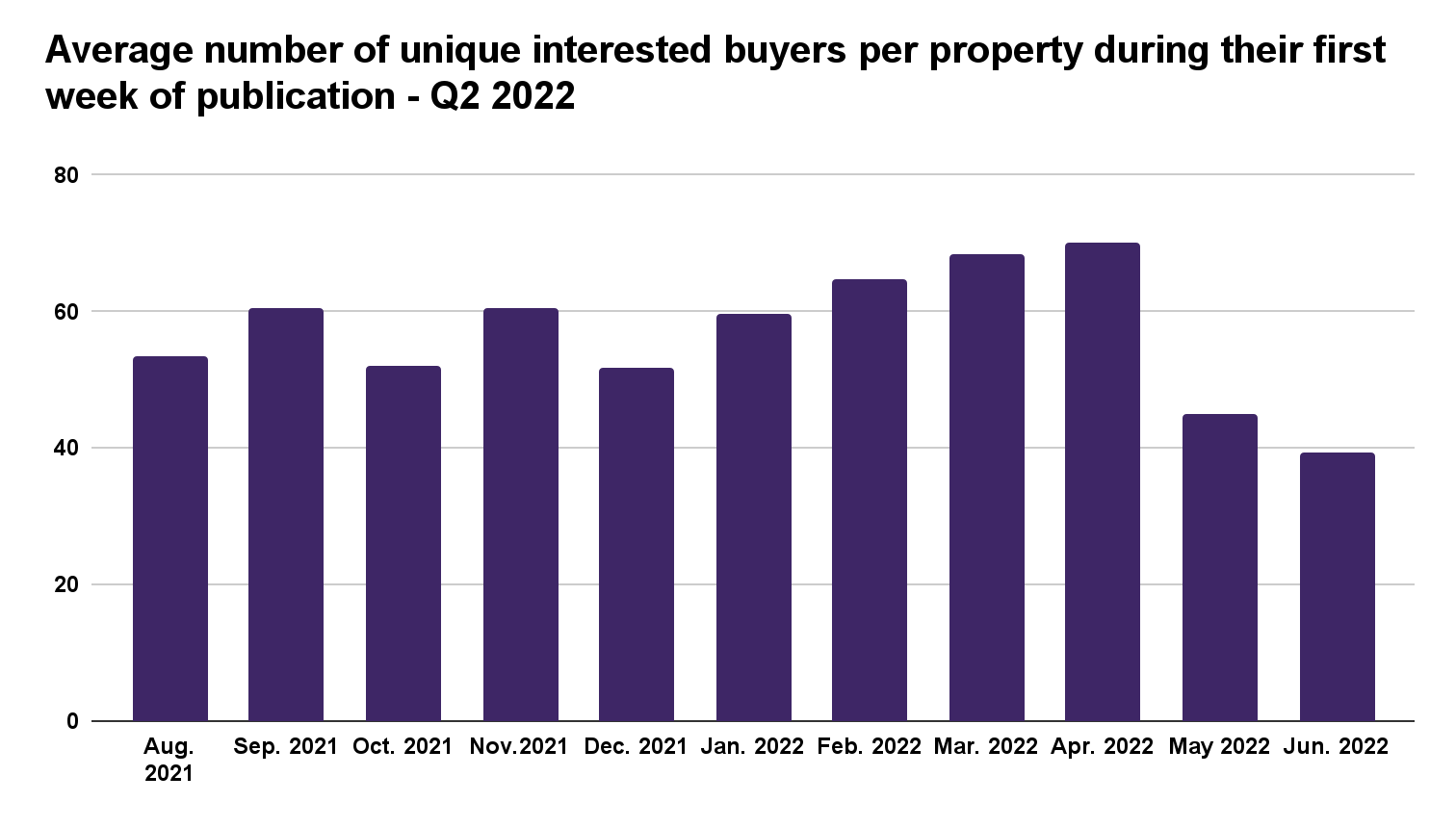 This tendency is also felt in the number of new buyer profiles created on the Neho platform. If there were more than 15’600 buyers who created an account online during the first quarter of 2022, only 13’350 opened a personal account in the second quarter, a decrease of 15% in only a few months. Even if this decrease may seem significant at first glance, it is not alarming since the number of potential buyers is still high, so there is always at least one buyer ready to make an offer at the price requested by the seller.

In addition to a decrease in the number of buyers, we are also witnessing an increase in the time it takes to sell a property compared to last year. In June 2021, 52% of offers were accepted during the first two months of the publication of properties on real estate portals. One year later, in June 2022, the figure is down to 39%, or 13 points less. 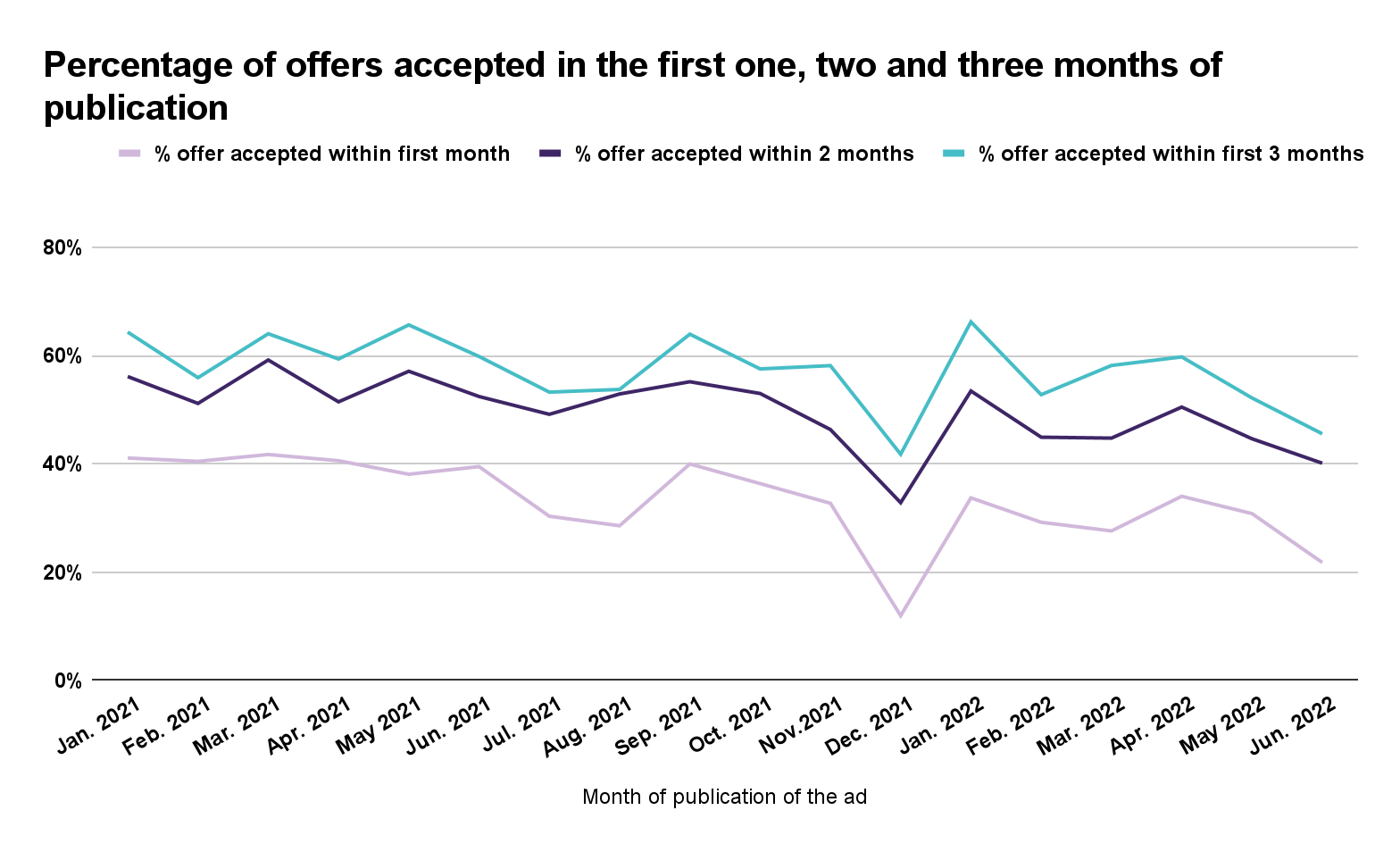 Prices are still on the rise

It seems that the latest events and changes have not reversed the dynamics of real estate prices, which are continuing to rise. According to the SWX IAZI Private Real Estate Index, the price of single-family homes has increased by +0.6%. Condominiums, on the other hand, saw prices rise by +0.8% between the first and second quarters of 2022.

We also observe this trend at Neho since the final price of transactions in the second quarter consistently exceeds the price of the hedonic valuation for all types of housing combined. If in the first quarter of 2022 the difference between the two indices was 4.68%, it reached 6.97% in the second quarter, i.e. an increase by a factor of almost 1.5  i.e. an increase of 2.3 points between the first two quarters of the year. This positive development echoes the price growth mentioned above and extends to all cantons. 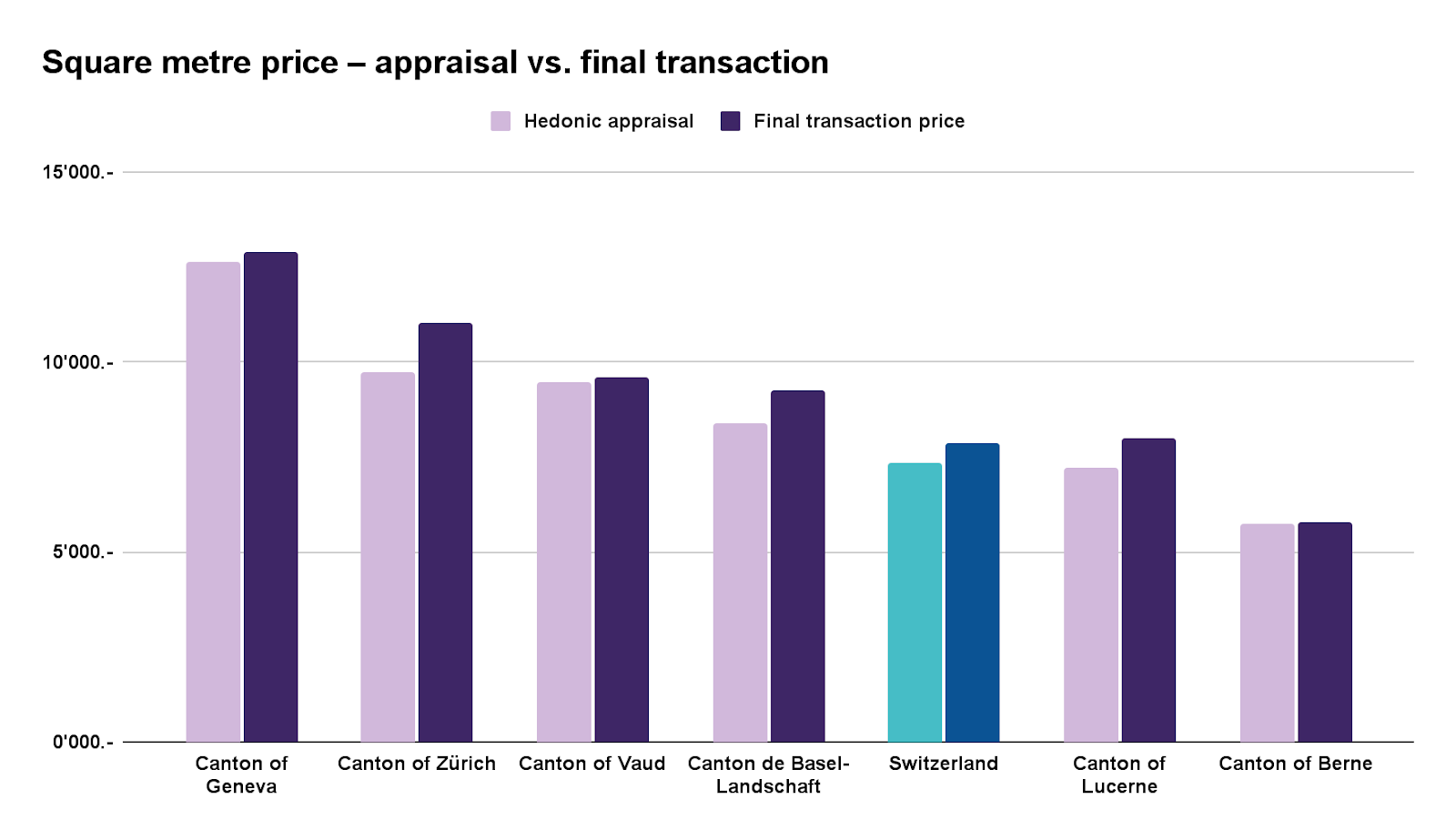 For the time being, no contraindication to selling

Finally, despite a recent slowdown in demand, it seems that prices in the Swiss real estate market were not affected during the second quarter of 2022, as demand always exceeded supply. Thus, for each property for sale, there was always a buyer, while prices continued to rise during this period. This situation could change if we refer to the recent announcement of the European Central Bank, which recently raised its three key interest rates considerably, which will lead to an increase in the cost of mortgages in our neighbour countries. Thus, if the Swiss National Bank follows the lead of its European counterpart, it is likely that demand will further decline and prices will stabilize in the Swiss market. As a homeowner, this is still a good time to sell, as prices are still at a particularly high level for the time being. 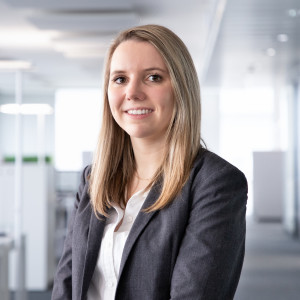 Graduated with a Master's degree in communication, Charline masters the different communication techniques. After several missions in the entertainment sector, she joined Neho's marketing team to participate in the creation of content for the agency's various communication materials.

How much is your property worth?

Appraise your property online in 2 minutes.
Free of charge, no strings attached.

Appraise my property for free
What is your purchasing capacity?

Wondering how much you can afford to spend on your dream property? Give a try to our easy calculator.

Introduces you to its real estate blog: Carnotzet

Have you seen these articles?

Our engagements against the 2020 coronavirus pandemic

Real estate: With prices on the rise, will they continue to increase?

Among your many advantages: